Monday morning at the Barnes and Noble Café is usually slow. Today is usual. I come here out of habit, or routine, usually with a particular assignment in mind. It gets me up and dressed. Maybe after thirty years of the public school teacher routine, it is a habit.

Sitting in the back right corner at a small table with a carefully selected chair that doesn’t wobble and is just the right height, I watch the comings and goings. The assistant store manager is again behind the counter; she was last week too. I’m not sure what that means.

Billy and Frances are here, seated in the middle at a bigger table. He’s sporting his purple and gold LSU cap; she’s dressed in her bright spring colors. She has told me before that for decades she had to wear dark clothes at work, so when she retired she bloomed. Even her cane is a print of purple and pink. She and I talk of our cats and what books we are reading. He periodically makes sugary pralines to share with friends and the cafe regulars.

Today her shoes are metallic gold. Slip-ons with a fuchsia flower applique. I tell her I like them, and she confides with a sheepish grin that her husband hates them.

At the condiments bar another regular is fixing her coffee and bantering with the café manager.

“You go fishing this weekend?”

“I didn’t, but my husband did. Down at the river.”

“The river?” she says horrified.  “I don’t play with that river.”

Behind them a clattering of ice rushes into the ice chest.

Earlier as I was pulling into the parking lot the doctor backs his car out. He’s another regular, a bit more bulked up than the rest of us, wearing workout clothes, he sits down to his grande coffee and reads thick thrillers for an hour, then leaves to get ready for work at a local emergency room.

Today is the beginning of spring break for schools in this district and there are few people in here. I expected more kids, but it is probably yet too early on this first day of sleeping in. The only sounds now, after the ice, are an instrumental on the Musak and a slight clatter of dishes.

Outside a cement truck rolls by, rattling the store windows, its mixing drum spinning.

A young Asian man strides through the parking lot toward the door, pulling off his motorcycle helmet. He takes the table on my left where one of only two outlets is available, then heads to the counter. There is a quiet conversation of ordering, but all I can hear from my post is $7.29.

The lady wearing a grey McDonald’s uniform gets out of her black Nissan. She will take the table diagonally across the room from me, near the only other outlet so she can plug in her computer and begin her paperwork. Payroll? Schedules? She is one of several who use this coffee shop as an office.

I’ve now been here now for a half hour and more people are arriving. An older African American couple take a table by the window nearest the door. She has a paperwork folder, he a zippered bag and handful of pens. A steady conversation hums from their direction.

A disheveled guy shuffles through the door wearing a black stocking cap and backpack, and carrying a clear plastic Starbucks cup. He fills the cup with water from the glass pitcher on the bar, then begins to clean a table off with moistened napkins. He sits down at his cleaned table, digs around in his pack for a moment, zips it up and walks back out the door. He too seems to have a routine.

A blue jeaned, t-shirted woman sets her plated apple scone and stack of books on the table in front of me then begins emptying packs of artificial sugar in her coffee at the bar. An unusually loud automated intercom announcement about the inventory system interrupts a rather raucous Muzak band that has replaced the mellow instrumental tunes. It’s time to pull out the orange neon ear plug from the front compartment of my backpack. I only need one for my left ear; the right hears at 20%. It’s already set to mute.

A different stocking capped guy with a knapsack is looking at the Eastern religion and philosophy bookshelves beyond the cafe, then wanders off. A twenty-something man standing at the far counter, buys a book and then walks toward the café. “DUH” is printed in a large white letters on his black t-shirt. It makes me wonder what he bought.

I put down my pen and begin reading chapter two of the book I brought. A Room of One’s Own.   Virginia Woolf is describing London’s British Museum’s surroundings as she sits at a desk. Somehow I feel connected.

It’s 11 o’clock. The conversation level has shifted from humming to buzzing. An older man is asleep at a table by the sunny window. More people sit down with their assorted drinks and pastries. And the two seated near the outlets are still pecking away on their computers.

Then three teen aged boys walk through the cafe. I guess the kids are waking up. 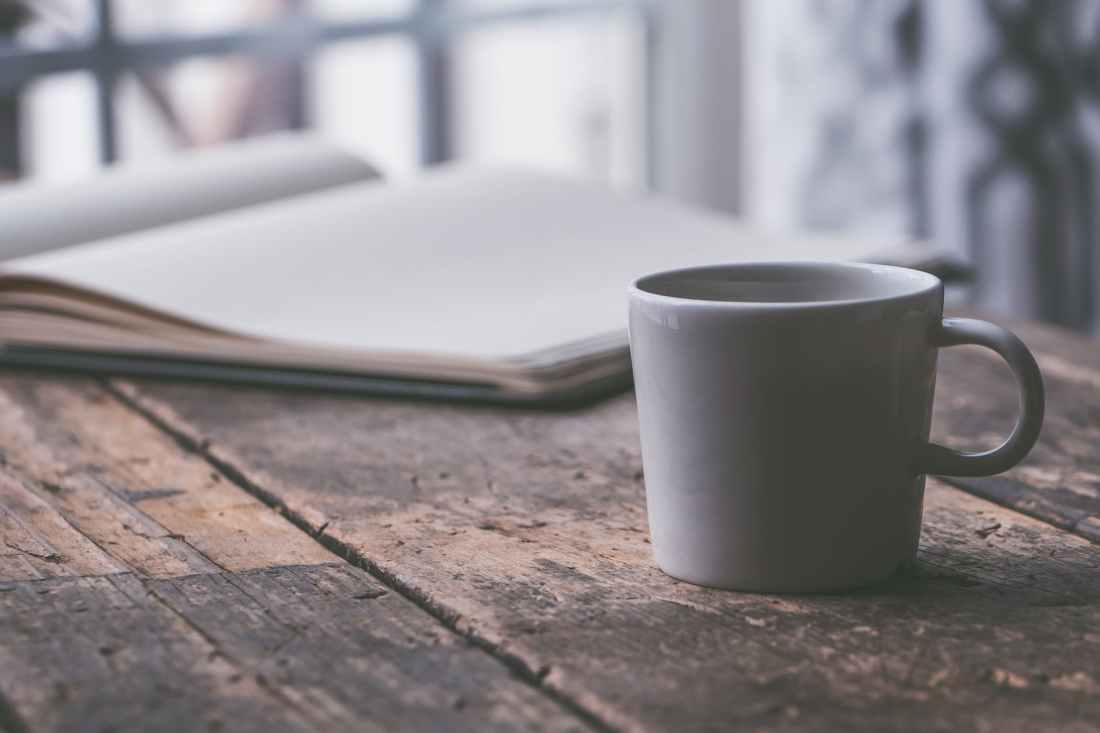 Life is amazing. Each of these people carry their own stories.

Try this: sit in an out of the way place where you can people watch and write down what’s happening around you. Pretty cool, huh?

Thanks for joining me!